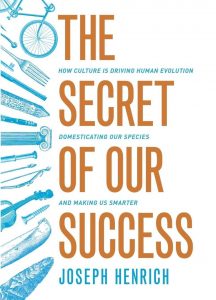 I first learned of Joseph Henrich when I read his jointly authored paper “In search of homo economicus: behavioral experiments in 15 small-scale societies” [pdf], which was published in economists’ top journal in 2001. The paper was impressive on two counts. First, it showed economists how anthropologists could use their field knowledge to explain behavior. Second, it undermined (yet again) economists who claimed to be describing “universal”  behavior. Henrich et al.  showed how culture affected human cooperation. Although some economists continue to ignore culture (one of my graduate school professors banned use of that word), those who spend time “among mere mortals” know that culture needs to be accounted for in their theories, analyses, and policy proposals.

It is for these reasons that I bought this 2015 book (subtitled: “How culture is driving human evolution, domesticating our species, and making us smarter”), which I’ll abbreviate as SOS. I wanted to learn more from a guy who asks useful questions and then does all he can to understand and explain the nuances to answering them.

I also want to note that I read this book after Yuval Hariri’s Sapiens, which I found to be insightful but slightly disappointing. (Others are more harsh.) I recommend Henrich’s SOS over Sapiens because it provides deeper insights and more useful ideas.

The secret, btw, is cultural evolution, i.e., how we learn, imitate and improve on ideas, not as individuals but members of a group. It’s from this source that we have language, abstractions, processes and rules-in-use (institutions) that help each generation do better than the last. (Henrich defines “culture” as “the large body of practices, techniques, heuristics, tools, motivations, values, and beliefs that we all acquire while growing up, mostly by learning from other people” Loc(ation) 239.)

For the rest of this review, I will summarize the ideas from SOS that appealed to me and give a few comments. As usual, these notes reflect my own perspective and learning. YMMV 🙂

Bottom Line: I strongly recommend this book for its deep and interesting explanations for how we got here as a species, how we behave and cooperate today, and how to understand the various pushes and pulls of our social and cultural institutions.