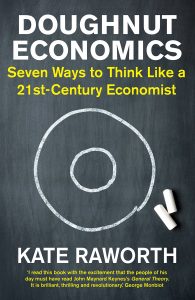 Kate Raworth’s book has attracted a lot of attention. Students has asked if I “teach the doughnut.” Raworth is feted as a rockstar at various festivals. Some reviewers claim a “breakthrough… that will help save the planet.”

So I had to take a look at this book, and a look was all I took.

First — and no surprise — Raworth has not discovered or uncovered anything. She’s just written out a number of well-known ideas that economists have discussed for decades.1

Second — and quite annoying — Raworth presents these ideas as a radical rejection of “conventional economics,” but her strawman caricature of those conventions is based on a Frankenstein-copy/paste-mess of ideas that are usually out-of-date, discredited or merely misinterpreted (by her).2

Third — and thanks god — she does explain a number of useful concepts that economists (and other social scientists) have been exploring for years. These ideas include many that I use for teaching and research, which is why I was not really impressed by the doughnut. (FYI, the idea is that we don’t want to “fall in the hole” of being too poor and miserable, nor “exceed the boundary” of unsustainable behavior.) With this in mind, I might recommend her book, as I would recommend Freakonomics or Economics: A Users Guide, except that all these books distort what economists actually do and the economic method. Raworth, in other words, gives a distorted view of economics (often derided as the “Econ 101 perspective”) that is likely to deceive readers into thinking they understand when all they’ve learned is a superficial perspective that falls apart when questioned.

I often say that an expert is someone who knows what’s missing from an argument (and thus what questions to ask). From this perspective, I can say that Raworth’s arguments are full of holes and wishful thinking.

Fourth — and here’s my elitist perspective — Raworth’s background (BA and MSc degrees from Oxford; 10 years at Oxfam) means that she has lots of  NGO experience but lacks experience with markets and economic theory. It’s thus no surprise that she’s suspicious of “neoliberal markets” and unaware of economists’ work on market failures, environmental economics, etc. I often say that an expert is someone who knows what’s missing from an argument (and thus what questions to ask). From this perspective, I can say that Raworth’s arguments are full of holes and wishful thinking. I would have been interested in her analysis of development, as Oxfam’s model puts far more reliance on “good people helping poor people” (and often failing because they are either not that good or just do the wrong things; read my paper) than on poor people helping themselves (and succeeding when corrupt governments and dodgy aid groups are not conspiring against them).

Fifth — and here’s my impatience — I didn’t read her whole book. Indeed, I could barely manage the first two chapters before I sat down to write this. Her prose is chirpy and her passion clear, but I disliked her preachy and snide tone (“it’s us good ones against them bad ones, dear”) on topics that are familiar to me and better discussed by other writers. (I’m now reading The Secret of Our Success and — wow –Heinrich’s work is stunning; review to come.)

Sixth — and here’s the (w)hole — Raworth seems eager to toss out the baby (economics) with the bathwater (her confusions of economics with politics, human actions with human aspirations) in her quest to “think like a 21st century economist.” The sad part is that all of these ideas were in circulation among economists in the 20th century, but not in general circulation. Why not? Because many people don’t like sharing the commons, many people want new cars, and many people, sadly, don’t care about poor people. So Raworth doesn’t need to “fix economics” as much as “fix humanity.” I doubt that this message will reach her readers — probably all of whom are well-meaning and well-off but politically naive or powerless. In every course I teach, I emphasize that markets are embedded in society/politics but that markets (where “excludable” goods are managed) have nothing to do with development or sustainability — the “non-excludable goods” that Raworth doughnut emphasizes — which are subject to political and community management.

Bottom line: I give this book 4-stars for its aspirational discussion of how we should behave, its selective review of useful economic ideas, and its overall emphasis on ideas that economists have been working on for 50-plus years. If you want to understand how economics actually works, then start here or here [pdf]. If you want a good overview of “political-economic thinking” and the state, then listen to Pete Boetkte (and read his SEA paper).

You can read all my reviews here.