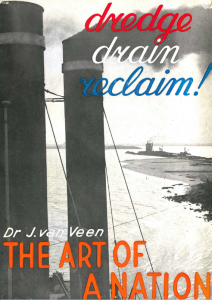 Johan van Veen began this book [free download] — subtitled “The Art of a Nation” — during World War II. He “found the time” because the Nazi occupiers of the Netherlands had forbidden most Dutch from maintaining the dikes and water works that kept the nation from sinking underwater. It was thus lucky for the Dutch that the Germans lost the war, otherwise they might have had to retreat from rising water that would have taken about half their land, their most important cities, and a majority of their civilization!

In the postwar years, Veen was able to finish the book and add more information, so I read the fifth edition of 1962, which was published after Veen’s 1959 death.

I found this to be a fascinating read due to its historical detail and wealth of data but also due to Veen’s obvious passion for engineering and water management. This passion was also backed by decades of experience, as Veen was the chief engineer of Rijkswaterstaat (the Dutch government’s body in charge of national water management) and — due to his prescient and insistent warnings about weak and under-maintained dikes — the chief designer of the Delta Works project that began in 1954, right after the tragic storm of 1 Feb 1953 that broke dikes, flooded 1,300km of land and killed over 1,800 Dutch. Veen had warned of such a risk in an earlier version of this book, and he set out immediately to recover, repair and build out defenses that would prevent the same tragedy from happening again. (No such floods have come to pass, but climate change will bring new and unusual challenges.)

The book is divided into four chapters. In the first, Veen sets the scene by reviewing the fascinating culture and history of the “free people” who chose to live at the mercy of the sea rather than pay taxes to live on the lord’s land. I recognized quite some dimensions of Dutch character, as well as learning more about the history that distinguished its regions (in Friesland they began by piling up mud above high tide; in Brabant they dared to block rivers, died by the tens of thousands when dikes broke, and then went out in the world to sell their dike-building expertise). This chapter (called “Spade work” but more properly drain)  explains why the Dutch take maintenance so seriously (to my great joy) — they have centuries of experience in those everyday tasks and numerous examples of what happens to those who do not keep their dikes strong and drains clear. (Veen confirms that the Dutch did indeed kill those unwilling to do the work needed to protect the community. My favorite (!) punishment was when the resister was skewered with a post and then buried, alive, in the dike that he failed to maintain.) In these early days, the Dutch needed to work with water that was too powerful for mere men. This necessity created men of art, skill and patience enough to build up an area over decades. I was surprised (and then not) to read of the many Dutch working abroad: The Erie canal was financed by the Dutch; its locks were built by Dutch engineers. This section finishes with descriptions of the great leaders who led the Dutch to claim so much of their land from the sea, and plea to ignore short-term profit and loss in favor of the long-term returns to the nation of new land. (Veen’s “think of the children” perspective is easier to understand as claim that a government with a low discount rate can build mega projects. That’s true, but it can also result in white elephants.)

Chapter 2 describes the surprising appeal of dredging, which never struck me as either fun or exciting. To make a long (hundreds of years!) story short, let me assure you that dredges are very exciting for the Dutch, as they — first in horse-driven and then in steam-driven form — made the difference between Amsterdam being a port at the center of an empire and a muddy estuary. Dredging was even more important to Rotterdam, as it allowed the Dutch to build canals and clear rivers to create the capacity that resulted in the largest and busiest port in the world (until Asian ports took over in 2004).

Chapter 3 “Master of the floods” is actually about land reclamation, which has produced a sizable share of the Netherlands. Here, Veen is in his most excited state, describing the great reclamation of the Zuiderzee. The fact that event did not pass (only one-quarter of the area was reclaimed, most obviously in Almere) makes this chapter interesting, as it reflects both the optimism of an engineer-unchained as well as capturing the boldness of “future” that characterised the post-War generation. The chapter is full of details on the science of land/water interactions, and histories of the efforts to persuade citizens to “invest in the future.” The engineering required to dredge new land into existence was extreme, risky and world-famous. The Dutch are still leaders in explaining how to master (or fight) nature.

The final chapter is Veen’s argument in favor of the Delta Works, which would cost a fortune but reduce the risk of floods such as that of 1953 by reducing the Netherlands’ linear risk via massive sluices and dams designed to keep the North Sea under control. In this chapter Veen, posing as the guest author “Dr. Cassandra,” argues for the Delta Works. To justify “invest in the future,” we are reminded of the old proverb “economy is   good, except for making dams and dikes.” This is Veen’s argument for ignoring benefit-cost analysis and just building the Delta Works. Luckily for us, he was right, if only in underestimating the value of saving his country from drowning.

I recommend this book on one-hand for its fascinating history and insights into the nation’s character, accomplishments, and power in managing water.

Thanks to PH for sending me this book!

Addendum (Dec 2022): How the Dutch make the “fascine” mattresses that hold mud and sand in place underwater.