In the Western diet, meat has for a long been a fundamental source of protein on people’s plates. However, research has revealed that in the we consume more meat than we should from the perspective of public health, and the climate. In fact, a study published in Science [pdf] finds that a vegan diet is the most efficient means of reducing one’s impact on the planet. Besides the greenhouse gas emissions, agriculture, and production of meat and dairy in particular, is also “the largest source of human-related nutrients in the Baltic Sea”, and is therefore one of the major causes behind the toxic algae blooms, which made the Baltic Sea unswimmable last summer, not to mention the impacts on the sensitive ecosystem.

In economic jargon, the cost of meat production for the environment would be described a negative externality, since it affects third parties who did not incur the cost. Due to this property, the free market is inefficient in allocating the socially optimal quantity, leading to too much of meat being produced. In the graph below, the lower supply curve represents the production cost without externalities, and the upper line is the social production cost where the externalities are taken into account. 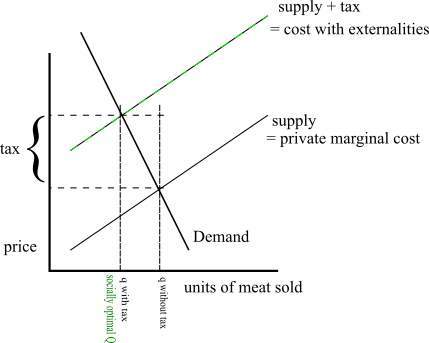 Thus, economic theory suggests that a tax that reflects the external costs to the third parties could internalize these externalities and bring the production to the socially optimal level, as seen from the graph. Or would it? According to a study [pdf], the value added tax on sugary products in Finland did not reduce their consumption, which is accounted to the inelasticity of demand since there are no close substitutes.

Although every supermarket nowadays has an ever-increasing variety of meat-substituting products, many still have a suspicious attitude towards them, and do not deem them as viable option, although people and the food industry would probably adjust in the long run. Therefore, a drastic increase in prices might be necessary to truly change people’s behavior, as the graph illustrates. Increases of the prices of such a staple good would also make the tax regime more regressive, thus hurting the people with lower incomes. Currently, meat substitutes are quite expensive. This is because the volume of production is low, and the competition is oligopolistic since there are only few producers who produce differentiated products.

In the future, if the market for meat substitutes grows, the price might decrease due to increased competition and economies of scale. On the other hand, if the tax increased the demand for meat substitutes, their prices might increase. Therefore it is somewhat tricky to forecast how much the consumers would be hurt if the tax would force them to move to meat substituting products. It might also be the case that some people would then replace lean meat products with sausages, or other processed meat products with even worse nutritional values. If people would not be willing to move to meat substitutes, adjusting the tax so that it accounts for the different health and environmental impacts of different meat products could be a good policy solution, but implementing such tax regime would also be costly and complicated.

Bottom line: Meat production has many externalities, which could be internalized with a tax. However, especially in the short run, the demand for meat might be relatively inelastic, and the farmers and people with low incomes might be hurt, which is why costs and benefits of different meat tax regimes should be evaluated carefully.

3 thoughts on “Should Finland tax meat?”