Since the 17th of November 2018, the “gilets jaunes” or yellow vests have been in the streets of France every weekend, to protest against a government, they claim, that only supports the very rich.

At its start, the movement was ignited by a fuel tax, which was supposed to gradually increase the price of diesel by 7.6 cents per litre and the price of petrol by 3.9 cents per litre starting from 2019. The implementation of this tax on top of other unpopular measures, such as a speed limit reduction on country roads from 90km/h to 80 km/h, was enough to push 300, 000 people on the streets to block roundabouts and voice their anger on the streets for the first week of protests. 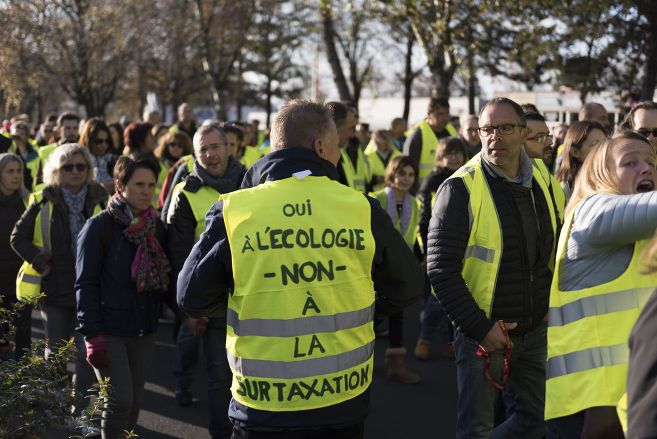 The protests have since turned sour. It is estimated that 11 people have died as a consequence of the yellow-vests movement, while more than 144 protesters and journalists have been severely injured, as they lost an eye or even sometimes a hand. The cost of the insured damages caused by protesters are evaluated to be around €200 million.

In response, Macron’s government had to make several concessions. It froze its plans of a fuel tax indefinitely, decreased existing taxes on diesel and fuel, and promised to increase the monthly minimum wage by a 100 € before 2020. The prime minister also announced that electricity prices would not increase for several months. On the 25th of April, as the “gilets jaunes” entered their 23rd consecutive week-end of protest, Macron promised tax cuts of €5 billion on the income of average and lower earners.

What is sure is that this fuel tax and the ensuing protest was a disaster for the government who did not predict such an uproar. What is unclear is whether they are any social and economic benefits to any parties as an outcome of the protests, and if the environmental costs of the frozen fuel tax are recoverable or not. Would it have been better to abandon the idea of a fuel tax from the start, as the social costs would be too big?

When Macron pushed for a fuel tax during the summer of 2018, he disregarded the comments of Matthieu Oprhelin, an “En Marche” deputy, whom told him to create a temporary fuel subsidy for people living in rural areas with a low income. Maybe he should have listened.

Bottom Line: The abandoned fuel tax of Macron’s government provides us with an example of a failed environmental policy that put too much burden on those who relied on their cars while failing to meet its environmental purpose. Indeed, only 20% of the money from this tax would have gone to a sustainability fund, raising questions about the policy’s legitimacy.

One thought on “Sacrificing the environment for a few?”