Most of the air pollution detected worldwide is unsurprisingly concentrated in big cities, being the result of coal consumption, gridlocked traffic, heavy industries and incremental population density, i.e., high energy demand. All these factors greatly contribute to increase air pollution and, interestingly enough, it was found that traffic and cars are the main source of a whooping 25% of total worldwide production of particulate matter which increases cities’ air pollution, where traffic jams are the norm. 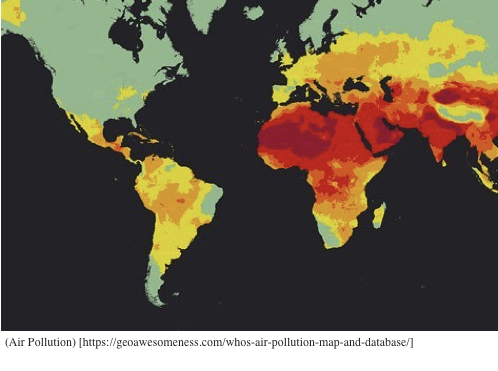 Other than contributing to increase CO2 concentration and our poor earth’s fever (e.g. Climate Change), air pollution is considered as the most proliferous and silent killer currently existing, accounting for 8.8 million deaths worldwide and 800.000 deaths in Europe every year; the numbers seems destined to increase. This extremely high number makes air pollution the number one environmental cause of death worldwide. To put these results into perspective, water pollution is the second source of death from pollutants, accounting for approximately 1.8 million casualties every year. This lower data is due to the fact that polluted water affects mainly underdeveloped countries whereas air pollution affects 92% of the global population.

Due to the rising issues generated by air pollution, many cities around the world decided to open their eyes on this issue and implemented alternatives to decrease pollution from traffic jams.

One policy that was applied in different ways, but with the same aim of reducing air pollution, is the Limited Traffic Zone (LTZ) policy.

Milan can be taken as an example of a successful implementation of such policy. Due to its precedent extremely high concentration of air pollutants, policy makers decided to introduce the LTZs policy through the installation of EcoPass [pdf] aimed at reducing the input of cars in the centre of the city. This operates through the concept of ‘congestion charging’ meaning that vehicles that are fuelled through diesel have to pay 5€ to enter the area, whereas public transportation and cleaner vehicles are exempted. This application resulted in a decrease in air pollution of approximately 18%, an increase of public transportation usage of 6.2%, a reduction of polluting vehicles of 49% and an overall increase in share of cleaner vehicles of 16.6%. Finally, traffic congestion was found to be 28% lower than the original baseline [pdf].

The operational and investment cost of EcoPass reached €21 million per year, which is usually directly funded by the revenue obtained from the project. The Ecopass is thus estimated [pdf] to have generated a yearly net benefit of approximately €15.7 million from 2008 to 2010. This net gain however, does not include the revenue made from fines, which if it was to be taken into account, would raise the net profit to about €50 million per year [pdf].

However, the total revenue generated from the EcoPass policy was found to be decreasing steadily since the first year of its implementation. This is because this project also created incentives for citizens to buy cleaner vehicles, which is indeed a good thing for the environment, but eventually reduces revenue [pdf]. That said, it’s important to remember that Milan’s main goal [pdf] was to reduce air pollution and increase liveability, which has been achieved.

The lower emissions and higher share of sustainable vehicles, demonstrates that the application of such policy is effective in environmental terms. This still raises financial concerns on sustainability of this project in the long-term, as the revenue made from EcoPass struggles to compensate for its costs. This means that such policy may require some adjustments. A potential solution could be removing the exemption from some vehicles [pdf], which would increase revenue. It’s important that Italy keeps on pursuing this policy despite its flaws. Even though this might require some precautions, LTZ seems to be on the right path to reduce air pollution in urban areas.

Bottom Line: Besides its limitations, Limited Traffic Zones Policy can be considered a good solution to reduce the level of toxicants generated by traffic jams in the air of big cities and could be potentially improved and applied in different contexts.