When I read this tweet by Dr. Paul Behrens (below), all my personal frustrations about travelling within Europe re-emerged. I frequently face the decision what mode of transport I should choose when travelling from my home in the very south of Germany to The Hague. Do I take the plane, seeing that it is fast and cheap, yet emits the most CO2 of all transport modes? Or do I take the train, which emits the least CO2, yet is relatively expensive and delays are not an exception but rather the norm? 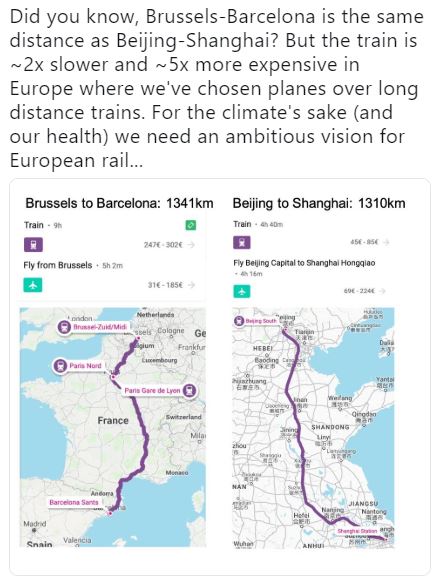 How have we come to face such a dilemma? The answer is comprised by several factors. With regards to the European aviation sector, one finds that kerosene is exempt from excise duties within the EU [pdf] despite the fact that road and rail transport face excise duties. Interestingly, individual member states are allowed to impose a tax on aviation fuel used in domestic flights. However, the several bilateral agreements between member states to exempt kerosene from taxation shows they do not want to. Rather, they hand out an effective subsidy for the aviation sector which further fuels its growth and emissions. Furthermore, international flights out of Europe, contributing 60% to the rising carbon emissions of European aviation, are entirely unregulated and not subject to VAT on airline tickets [pdf]. Nevertheless, the effectiveness of general ticket taxes in providing necessary incentives for airlines to reduce emissions has been questioned [pdf]. The study suggests basing a ticket tax on specific measurements, including the distance to the destination, as well as on an airline’s average fuel lifecycle emissions. The latter allows the passenger to decide to either fly with an airline that has exclusively used fossil fuels and thus, face a higher tax rate or, choose an airline that has used a share of low carbon fuels.

If flying in Europe will become more expensive, how can it then be ensured that all citizens remain mobile and connected? Looking at the Chinese example of a functioning, affordable high-speed rail network, the answer seems clear. Currently on track to complete 30,000 km of high-speed railway lines by 2020, China has created an effective means of connectivity between major cities throughout the entire country. So, where does the EU stand on high-speed rail? A recent report by the European Court of Auditors arrived at a rather damning conclusion. Not only will the European Commission fail to achieve its target of tripling the number of km of high-speed rail lines by 2030, but the report states that in fact, “there is no European high-speed rail network”. The reason is multi-faceted. Among other factors, operational models differ among member states, resulting in high-speed trains using conventional tracks and conventional trains using high-speed tracks. Moreover, costly high-speed lines able to handle speeds of more than 300 km/h have been constructed where they are not utilized and generally, trains have been found to run on average at approximately 45 % of the lines’ design speed. Thus, even though high-speed trains exist in Europe, they deliver low-added value.

Bottom line: Findings show a general lack of a European wide vision. Neither for taxing the European aviation sector appropriately, nor for ensuring rapid progress in establishing a consistent European high-speed rail network. If the EU is serious about cutting emissions and advocating for rail to be a serious competitor to aviation, enhanced cross-border collaboration is required.