German society and its political narrative have changed with humans relation to the environment. Politicians are using the “green” narrative to gain votes. Good can – and has – come of this; due to increasing social pressure, since the late 90’s early 2000’s there has been a huge rise in renewable energy generation in Germany, increasing from around 3-5% of total energy production in 1998 to about 38% in 2018. It is the one of the countries at the forefront of energy sustainability. On the other hand, however, the political aspect of this genuine societal movement towards more sustainable living can warp the materialization of solutions to our pollution in such a way that they may end up doing more harm than good.

Nuclear energy in Germany is a good example of this. Following the 2011 earthquake and tsunami that caused the reactor breakdown in Fukushima, there was heightened fear around nuclear energy globally. Just two weeks later, Germany’s green political party, ‘Die Grünen’, had a sudden spike in their amount of supporters. For the first time, the party had won seats in the state parliament. With this political success in 2011, they accelerated the process of decommissioning Germany’s running nuclear reactors. They started this process themselves in the late 90’s, when the Nuclear Exit Law passed, at a time when the fear of nuclear extinction was still very much felt and reducing the perceived nuclear risk was central to their agenda. They still keep a similar agenda, and continue their fight against nuclear power even though there are much bigger environmental threats looming. Therefore, along with Merkel’s announcement of the ‘Energiewende’ (Energy transition plan) in 2011 hailing in a new era for renewables, also came the news that all 17 nuclear reactors in Germany will be closed by 2022. As people that care about climate change we might ask ourselves; is all this environmentalism really beneficial? 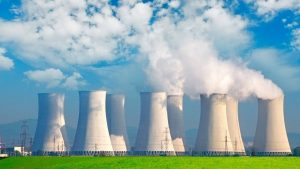 Even though the renewable share of energy production is rising year over year, a simultaneous switch from nuclear energy over to fossil fuels is happening. Due to the inherent variability and unpredictability of renewable energy sources (intermittency), a grid powered solely by renewables cannot follow the daily ups and downs of energy demand within the day, and a certain share of the electricity still needs to come from sources that have the capacity to dispatch electricity on demand. In order to meet the market hourly demand they would usually get this electricity from a mix of sources; nuclear, fossil fuel and natural gas. Out of all energy sources, renewables have the lowest emissions per unit of energy produced (9-46 g CO2e/kWhe), followed by nuclear (16-66 g CO2e/kWhe) and finally by fossil fuels (443 -1050 g CO2e/kWhe). In all it’s haste to pass a deal that would please their voters, the government overlooked how they would power the country in the absence of nuclear power.

Germany has now increased the share of energy it generates from coal to around 40% of the total energy output (2016 numbers). Even though they have 38% of their energy coming from renewables, they had to nearly double their reliance on locally sourced lignite (brown coal), the fuel source with the highest emission per unit of energy, so much that throughout 2013 to 2015 emission levels rose by 1.8 % while the EU’s lowered by 1.3%. This trend will continue as more and more of the nuclear generators are decommissioned until 2022, since there are no other alternatives other than coal to replace nuclear in Germany. This whole plan of going green by reducing nuclear power seems to be backfiring in a spectacular way.

So why in hell are they doing it? To please their voter base. The Green party’s ideological attack on ‘toxic’ nuclear power has undermined its potential contribution to a low-emission energy transition.