We all know we live in a consumerist society, but what are its origins and did it develop naturally? This post explains the surprising influence of Freud on our consumerist society. It all started at the 1929 Easter March in New York when a group of women lit their cigarettes— an act publicly unacceptable at the time, and even considered rebelliously feminist. For many, including the women, the lighting of their cigarettes seemed to indeed be part of a greater struggle for power; the Women’s Liberation Movement. However, few were aware that the actual intention behind the action was for the American Tobacco Company to increase cigarette consumption among women. These women were paid by Edward Bernays, Sigmund Freud’s nephew, to light their “torches of freedom”— the cigarette became symbolic of women’s freedom. I argue firstly that this event marked only the beginning of the implementation of Freudian psychoanalysis as a tool used to promote consumerism in America, and that still today, we are living in a society full of passive consumers. 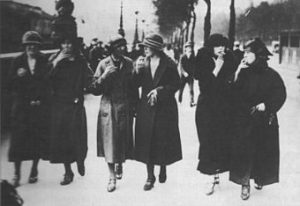 In part one and part two of the brilliant documentary The Century of the Self, we see how Freud’s ideas were employed in order to create a mass consumption society. Freud believed that humans are irrational, governed by their subconscious fears and desires. Bernays, through his work as a Public Relations Counsellor to American corporations, applied these theories in his advertisements. These ads appealed to people’s innermost desires, leading them to consume more. For example, Bernays suggested to remove an egg from an instant cake mix which consumers had to add in themselves. He believed this would help eliminate the sense of guilt housewives felt for not having made a cake themselves from scratch. This seemingly simple change had the desired effects and sales increased massively. This strategy turned people into passive consumers. However, this passivism turned into activism when people began to notice and discover the selling strategies and conditioning. In 1962, awareness increased especially after celebrity and high-profile psychoanalyst patient Marylin Monroe committed suicide.

In part 3, it is shown how corporations in the 60s and 70s turned activism into a new kind of consumerism based on individual rather than mass needs. During the 60s, an alternative psychoanalytical perspective regained popularity, it was originally developed by Wilhelm Reich who believed the opposite of Freud. In his view, humans are good in and of themselves and that society repressed their inner selves which made them violent and mentally unstable. He argued that people should express their fears and desires which would allow them to be freed of the conditioning and control by society. This created individuals with individual desires, which meant the end of mass consumerism and a problem for corporations who couldn’t sell their mass-produced homogenous products to individuals. But then a different psychologist, Abraham Maslow, argued that people’s different desires could be categorized in a hierarchy of needs. This meant that corporations could now develop products based on categories in the hierarchy of needs. Therefore, the products seemed highly personalized which emphasised the feeling of individuality in consumers, which made them buy them.

By the end of the century, society had experienced an ideological shift from a mass consumerist society to an individual consumerist society which allowed companies to supply products for ever-changing needs which allowed consumerism to flourish like never before. A report by the US Department of Labor and Statistics [pdf] looked at consumption statistics in the US between 1901 and 2003. From 1918-19 to 2002-03 household expenditures grew from around $1,500 to roughly $41,000. On top of that, from 1959 to 2001, consumer spending on non-essential goods and services increased from 4% to 9.3%.

Today, nearly 50 years later, we are still living like passive consumers. From 2003 to 2017 US consumer spending increased from $41,000 to $60,000 a year. The only exception being a slight drop in the years after the financial crisis of 2007-08. Consumer spending on non-essential goods and services as a percentage of total spending also increased. From 2001 to 2011 this grew from 9.3% to 11.2%. Therefore, not only do we see a persistent but a growing passive consumerist society that over a time period of nearly 100 years was fabricated through Freudian psychoanalysis.

Bottom line: We are still passive consumers in society, influenced through the theories of psychoanalytic thinkers.